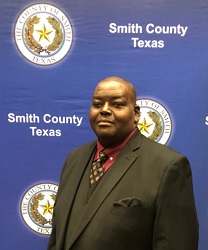 Prior to his appointment, he was employed at the Upshur County Sheriff’s Office and served as captain over the Detention Division, Court Security and Extradition Division. Pinkerton worked for the Smith County Sheriff’s Office for more than 28 years, and rose through the ranks to chief deputy, retiring in 2012. He is very active in the community and serves on the board of directors for several nonprofit organizations.  He has also received numerous awards during his years of service.

A Pre-Trial Bond is a personal bond offered as an alternative to jail release for those individuals who qualify. The Pre-Trial Release Office is funded through the Smith County Commissioners Court, and was established in March of 1979.

The mission of the Smith County Pre-Trial Release and Personal Bond Office is to provide judges and magistrates with information on defendants charged with felony and/or misdemeanor offenses by thorough, accurate interviews and investigations.