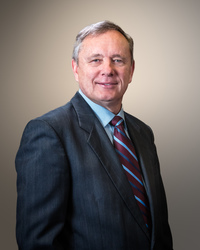 Terry Phillips took office in January 2009, as Commissioner for Precinct 3, the largest of the four commissioner precincts. Precinct 3 extends across the entire northern half of Smith County and takes in several small communities. Incorporated cities include Lindale, Winona, a portion of Overton and, of course, Tyler and Hideaway. Camp Ford Confederate, a prisoner of war camp during the Civil War, is also located in Precinct 3.

Terry was born in Gregg County and remained there just one year before his parents moved to New Mexico. His father retired in November of 1974, and moved the family to Tyler. In January 1975, he enrolled as a senior in John Tyler High School, where he met his future wife, and graduated that same year.

Terry continued his education at Tyler Junior College, earning his associates degree in petroleum technology. That was followed by studying supervision and government at the University of Texas at Tyler.

After dating for three years, he married Karen Bryant, of Tyler, in January 1978, and they began their life together in Lewisville, where Terry worked as a Well Test Analyst at Otis Engineering. In 1980, the couple moved back to Tyler, where Terry worked for Getty Oil Company. Soon after, Texaco bought out Getty Oil, and Terry remained with Texaco USA through the mid 1980s, when he began acquiring real estate. He continues today managing properties.

Terry has lived in Smith County for 30 years, where he and his wife have raised their two sons, Lance and Derek.

The Phillips family has attended Rose Heights Church of God for 25 years. During that time, Terry worked several years in the Children’s Department and served on the Pastor’s Council. He serves as Head Usher.

Terry likes to think of himself as a straightforward, down-to-earth, plainspoken, conservative.

Stay up to date with with what is happening in your precinct. Be added to the Precinct 3 email alert list!